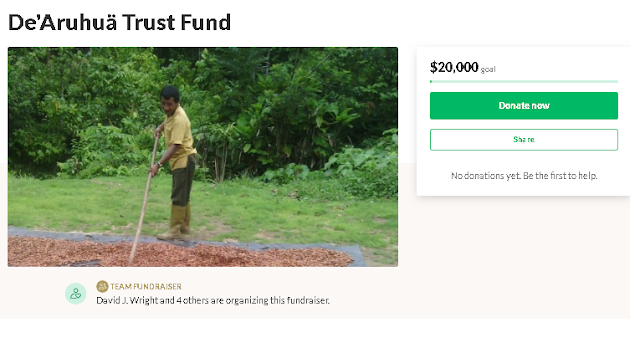 Starting Out is the Hardest Part

Getting started is the hardest part of accomplishing any great achievement, even if it is a relatively small achievement in the eyes of the world like a small chocolate factory operated by an indigenous tribe. Generating interest and new support for a project in a world full of projects is difficult unless you can manage to convince an initial audience that your project will succeed and that it is special in some way..

We started building on the idea of starting a chocolate factory with the indigenous Piaroa last year and came to terms with our objectives and purposes in June of 2019 reaching a final agreement with the Piaroa this September recognizing two of them as Globcal International members and commissioners which will facilitate the formation of the project.

Now finally we are on a good path because we are organized in the presentation and development of the chocolate factory with a good viable business plan thanks to the help of Globcal International members Clay Gordon, Chocolate Expert and Consultant from TheChocolateLife; Maria Veneke, Goodwill Ambassador trained in the SDGs from Sweden; and my son Nicholas Wright, Nanoscientist who is pretty good with his English.

Another member of the project, Ambassador James Garcia said referring to the business plan, "that it all looks pretty good, but it should probably have better financials using charts, an executive plan with a timeline and to pull together an initial development fund through crowdfunding."

We are taking Ambassador Garcia's advice by developing an executive timeline for the next 10 months in our business plan. So now we expect to have five (45 day) campaigns, with 15 day intermissions to regroup and prepare the next phase, each to be focused on a different aspect of the formation.

The first phase begins now with a GoFundMe Campaign to establish the De'Aruhuä Trust Fund being presented by myself and other goodwill ambassadors, it was developed over the last several days, is being based in Richmond, Kentucky through an organization I founded in 1994 and it is being deployed now, currently there are six or more team members from Globcal International that will be helping to promote the project in the social media are registered to help in the crowdfunding platform.

The donated funds being raised will be used for the indigenous Piaroa develop a foundation, to get tools, provide them with uniforms, plant tree seeds, purchase sports equipment, present practical educational workshops and enable many other benefits from forming a sustainable well-defined organization. The published program explains it very well on GoFundMe.

We are looking for folks willing to support us to donate $10, $50, $100, $1,000 or whatever they can to our campaign to help get us started. People can also donate on our website or buy shares in our chocolate factory.

We will also be introducing a crowdfunding page on Patreon in the coming days where there are different ways to invest in the De'Aruhuä Chocolate Business Plan and Cooperative as well as an article presenting our project as it is registered in the United Nations SDG Partnership Platform.

No sooner than the campaign began it was ended by GoFundMe. The campaign was actually published on Tuesday which gave us time to organize a six member team of goodwill ambassadors from Globcal International to promote the campaign; however at 5:23 PM yesterday the support office at GoFundMe stopped the campaign and removed my account because of the target country in part is Venezuela and relief would be going to Venezuelan citizens. Despite this we replied to their letter and explained our situation.

GoFundMe wrote: "Unfortunately, you have created a campaign in or intend to distribute funds to a country that is not supported by our payment processors...Because of this, your account has been removed.

We have few options other than to understand that they have their own rules and policies.

As a result of this we have established a Donation Page on our website effective immediately.